Following on from Part 1 of our Fife Coastal Path blog, we will now look at the rest of the route which is the longest continuous coastal path in Scotland.

Overall, the Elie to Kingsbarns part of the path can be quite rough to walk on. It is absolutely packed full of geological, historical and wildlife interest. It will also takes you through the picturesque fishing villages of the East Neuk of Fife. Fife Coast & Countryside Trust advise to allow 5/6 hour for this section.

The Elie to St Monans part of the path starts at Ruby Bay, which is famous for Red Garnet gemstones which resemble rubys. Make sure you visit Elie Lighthouse and Lady's Tower built for Lady Janet Anstruther as a summer house in the 18th century. Soon you will see the ruins of Ardross and Newark Castles before coming to the stunning 14th century St Monans Church, the closest church to the sea in Scotland. Walk through the village of St Monans and walk past St. Monans Windmill, once used to pump seawater into the salt pans. The path then takes you to Pittenweem which hosts Fife’s largest working fishing harbour and a cave used by St Fillan in the 7th century. 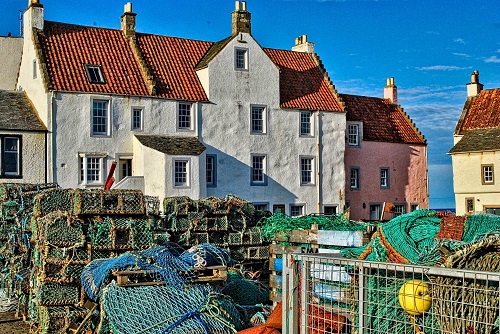 Pass Anstruther Golf Course and on to the village of Anstruther itself. This village is noted for its UK award-winning fish and chips, national Scottish Fisheries Museum and the Reaper, a herring drifter built in 1900 and used in the filming of the hugely popular Outlander series. From Anstruther, there are daily boat trips during the summer months to the Isle of May nature reserve.

Pass through Cellardyke, and its lovely wee harbour, towards Crail. You will pass some highland cows on this route and then you will come across Caiplie Caves which are a prominent weathered sandstone feature. Eventually, the path winds round and Crail Harbour will be presented to you. This is one of the most photographed harbours in the UK. 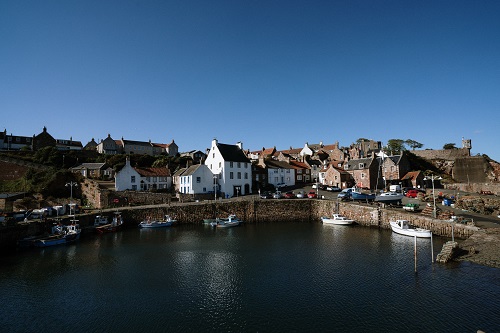 The path continnues round onto Fife Ness and can be challenging in places with narrower and altogether rougher terrain. It passes the Scottish Wildlife Trust’s Kilminning Coast Wildlife Reserve. You are now at the most easterly point of the region and the path then passes King Constantine’s Cave where he was killed in around 874. Beyond Crail golf course, the route continues along the shore beneath the Randerston cliffs. Walkers should wait for low tide before attempting this section. The path then leads to a bridge over Cambo Burn then continues along a sandy track through the dunes. An alternative route follows Kingsbarns beach.

The coastal path is tidal in places between Kingsbarns Beach and St Andrews so walkers must check tides. Boarhills to St Andrew’s is the roughest of the route and should be walked only at low tide.

A prominent geological feature on this part is Buddo Rock which is an impressive stack of pink sandstone. The Rock and Spindle is another nearby rock which is the weathered remains of a volcanic plug.

You will then come upon Kinkell Ness before descending down to the East Sands, St Andrews where you'll often catch surfer and can grab a toastie at the popular Cheesy Toast Shack.  In St Andrews, there are two route option, either over the cliffs and past St Andrews Castle or through the town with its many attractions. 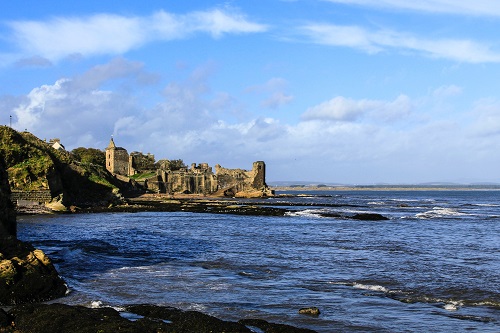 Follow the path behind the Old Course Hotel (look out for the world famous golf course, The Old Course) and the cycle path to Guardbridge from where you will get fabulous views of the Eden Estuary Nature Reserve. The bridge in Guardbridge is probably Scotland's oldest surviving bridge.

The path then takes in the Tentsmuir National Nature Reserve before you walk through the lovely Tayport village and finally arrives at Wormit Bay after passing the Tay Road Bridge.

Tentsmuir Point National Nature Reserve is home to a diverse variety of wildlife including birds, bats, red squirrels, seals and butterflies. Once the path leaves the forest and onto Tayport Common, there are great views across the river Tay over to Broughty Ferry Castle. After passsing the Tay Road bridge and the Tay Rail bridge, you will come to Wormit Bay. Beware there is Highland Cattle grazing on this section of the path. Wormit Bay to Balmerino passes through fields and woodland and some sections are steep.

Balmerino to Newburgh is the final stretch, It is long and quite strenuous as the path almost reaches the summit of Normans Law. The scenery is all so different from pine woodlands, river views, pastoral fields and quiet narrow roads. Be sure to stop by and admire Balmerino Abbey. Then follow a woodland path over bridges and dens to reach a large track heading to the road towards Brunton until Normans Law comes into view. Climb steadily up and into woodland. TThe path then winds up and over Glenduckie Hill before a lovely descent into Newburgh. Walk along the waterfront of this lovely wee town and through the coastal path arch to complete the Fife Coastal Path!

Discover amazing things to see and do in Fife at https://www.privatehousestays.com/regions/regions-sub/fife