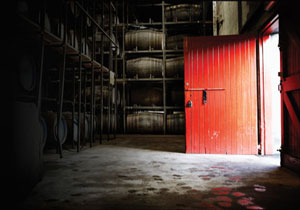 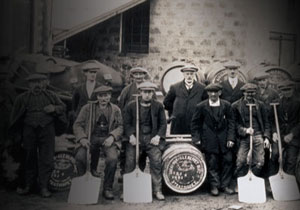 Situated at the junction of the rivers Lour and Spey, the distillery is surrounded by glorious scenery, dominated by the rugged peaks of Ben Rinnes a short distance away. Pure spring water for making the whisky is drawn from the Lour, and the maturing spirit in the warehouse beneficially inhales the moist Speyside air.

Aberlour is an ancient place as well as a beautiful one. For more than 1,400 years there has been a community there and signs of its long heritage are all around, from the age-old oak trees above Linn Falls to the mysterious standing stones on Fairy Hill.

The distillery was founded in 1879 by James Fleming, who shrewdly built it on the site of St Drostan's Well, thus securing forever this priceless source of pure spring water. When the journalist Alfred Barnard visited Aberlour in the 1880s, as part of his exhaustive survey of Scottish whisky distilleries, he described James Fleming's new establishment as a "perfect modern Distillery".

In 1898 a fire destroyed several of the distillery buildings and most of the whisky stocks. Under the supervision of Scotland's foremost designer of whisky distilleries, Charles Doig of Elgin, the Aberlour Distillery was largely rebuilt.

Over the past 100 years, with modernisation and technology, the landscape of the distillery has inevitably altered, though many of the original features are still there and the traditional working character of the place remains unchanged. The latest addition is the new Visitors Centre - the Fleming Rooms - named after the founder of the distillery.

Founder of the Aberlour Distillery, James Fleming (1830-95) was a man of enterprise, vision and compassion. The son of a local tenant farmer, he became a grain dealer with many whisky distillers among his customers.

This encouraged him to establish his own distillery and create a whisky of distinction. He acquired the land at Aberlour and with it the priceless water source of St Drostan's Well. Work began in 1879 and within a year the whisky began to flow.

James Fleming was a man of extraordinary generosity. He built a community hall for the people of Aberlour and left money to fund the construction of a hospital and a bridge across the River Spey. Self-effacing and modest, he lived by his family motto (bestowed on it by Robert the Bruce) of "Let the Deed Show". A sentiment appropriately displayed on every bottle of Aberlour.

The crystal-clear spring water that cascades down the slopes of Ben Rinnes, and makes its way from there along the Lour valley to the distillery, is the lifeblood of Aberlour malt whisky.

The plentiful rain and snow that falls on "The Ben" is filtered through layers of peat. The mountain itself is made of granite, which being very hard gives only trace elements to the water rather than minerals. As a result, the water that emerges from the ground is very soft.

Not a drop of this precious water is wasted. Only the required amount for each batch of whisky production is drawn off from the springs. Apart from being heated prior to joining the grist (ground malt) in the mash tun, the water is untreated in any way. Nothing is added and nothing needs taking away. It is a gift from Nature, pure and simple.

The Old Mill Inn Brodie is an AA 4 Gold Star Restaurant with Rooms in Brodie, a historic village in the Scottish Highlands. Our country setting, featuring an Award-Winning AA Rosette Restaurant, is a short distance from historical Brodie Castle and a brief stroll to the celebrated shopping destination Brodie Countryfare.