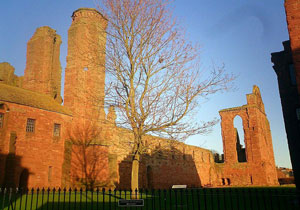 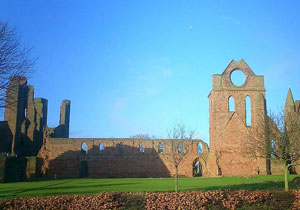 Arbroath Abbey is famously associated with the Declaration of Arbroath of 1320, which asserted Scotland's independence from England.Visitors can enjoy the herb garden along the south wall of the abbey church remains and explore the story of the day the Stone of Destiny came to the abbey in 1951 .

In 1296 the Stone of Destiny was captured by Edward I as spoils of war and taken to Westminster Abbey, where it was fitted into a wooden chair, known as King Edward's Chair, on which most subsequent English sovereigns have been crowned.

On Christmas Day 1950, a group of four Scottish students reclaimed the Stone from Westminster Abbey. In the process of removing it, however, the stone broke into two pieces. Taking the larger piece the students risked roadblocks on the border and returned to Scotland.

The smaller piece was eventually brought north and the Stone of Destiny was repaired by Glasgow stonemason Robert Gray.

A major search for the stone had been ordered by the British Government, but this proved unsuccessful. Perhaps assuming that the Church would not return it to England, the stone's custodians left it on the altar of Arbroath Abbey, on 11 April 1951, in the safekeeping of the Church of Scotland.

Once the London police were informed of its whereabouts, the Stone of Scone was returned to Westminster.

Afterwards, rumours circulated that copies had been made of the Stone and that the returned Stone was not, in fact, the original.

In 1996, the Stone was finally restored to the people of Scotland when the British Government moved it to Edinburgh Castle.

The Stone of Destiny was last used at the coronation of Queen Elizabeth II - and so it still performs its ancient duty, and to far greater effect, making not only the monarch of the Scots but of Britain, Canada, Australia and New Zealand.